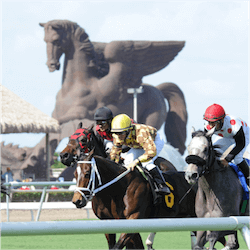 Bill Gallo To Have A Stake In Pegasus World Cup

Bill Gallo may be fairly new to horseracing, but he is also the man who was at the helm of one of the world’s biggest grain brokerage firms until recently when he decided to retire.  In short: Gallo knows what opportunity looks like.  He has found just that in the $16 million Pegasus World Cup Invitational (G1), richest Thoroughbred race currently running in the world.

The spot second edition of the Pegasus World Cup will be run on January 27th at Gulfstream Park and Gallo will be one of 12 stakeholders with a $1m iron in the fire.  Gallo recently partnered up with Jena Antonucci, a trainer based in Gulfstream, and under his guidance approached owner Solomon Del-Vallee for the opportunity to run Gunnevera in his spot.

Gallo was initially approached about buying a spot in the Pegasus World Cup during last year, but being cautious and not informed enough about the event, had decided to pass up on the opportunity.  He decided to first join in by observing and soon realised that what the organisers of the Pegasus World Cup were doing was, according to Gallo, sheer genius.

Choosing A Horse That Is Capable Of Winning

He said that he decided to leave it up to experienced partner Jena to find the right horse.

Gallo relates how crossing paths with horseracing for the very first time co-incided with that of crossing paths with Jena Antonucci.  It all started 5 or 6 years ago when Gallo was approached by a group of his college peers to join in on a partnership that made use of Antonucci as its trainer.

Gallo says that for him, it’s not a matter of having fallen in love with horses, despite the fact that they were magnificent beasts.  Having moved grain on and off of ships for most of his life, Gallo is and remains a businessman in his heart, and that is what horseracing is all about to the grain-mogul.

Gallo is also the majority owner of a motion picture production company as well as a prominent real estate company.  Horseracing suits him well, says Gallo, as it fits right in with his commodity mentality.