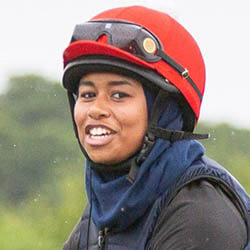 Khadijah Mellah had not even sat on a racehorse four months ago, but she was able to make racing history by claiming victory at the Magnolia Cup at Glorious Goodwood.

The 18-year-old rider is the very first person in the United Kingdom to take part in a competitive horse race while wearing a hijab.

The jockey, who is originally from Peckham, in South London, five-and-a-half-furlong charity race win while riding Haverland, trained by Charlie Fellowes. The duo were 25-1 outsiders to lose, but were able to beat the likes of Olympic cycling champion turned jockey Victoria Pendleton.

Talking about her victory, Mellah stated that there were no words that could describe how she felt, and that when she rode past the post she couldn’t believe it, until she saw her friends and family and began to cry. She added that horses give her immeasurable amounts of happiness, and that she has always loved them and always will, and she will continue to keep riding in the future.

Alexis Green, presenter for the BBC, along with former Apprentice star Luisa Zissman and TV personality Vogue Williams also took part in the event, which was all female. Frankie Dettori told reporters that she had watched the race and that it was incredible, and that she had met Mellah before the start. Mellah had learnt to ride while at the Ebony Horse Club charity in Brixton, but sat on her first racehorse this year.