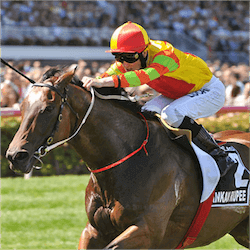 Predicting a place and a win for Saturday’s Bletchingly Stakes is proving to be tricky, with all 13 participants being likely contenders to lay legitimate claim to the event.

Price seemed cautious to predict a win for Rupee at Bletchingly, saying that the horse would be more likely to secure a 5th or 6th than a 1st.  Lankan Rupee has been known to have a few surprises up his muscley sleeves – and may very well end up surprising even his own on Saturday.

Price has made no secret of the fact that he would be running Rupee on Saturday with the eye on Memsie rather than on the Bletchingly Stakes.  Rupee needs to tap deeply into the spirit of the old Lankan Rupee if Saturday is going to be anything for the books.

Keeping An Eye On Royalty

Meanwhile, Duke of Brunswick placed behind Ability at Flemington, an outcome that did not seem to surprise Price.  Despite the less than favourable performance, the Duke remains a firm favourite and a bit of a dark horse in the run-up to Bletchingly.

Price seems to be placing behind punters, contending that he could not see how Duke of Brunswick could suddenly pull a rabbit from the hat and suddenly achieve a career best.  Price obviously seems to think that Duke has a few tricks to master yet before making a career move of Bletchingly Stakes.

Whilst the winning recipe has always been to stick with the champions – the Lankan Rupees – one must not forget to consider a star named Supido.  The Mick Kent-trained superstar has won 7 of his 13 starts, and will be pitted for victory on Saturday by rider Beau Mertens.  Supido reigned victorious at the Group 3 Monash Stakes last Saturday with Luke Nolen steering him on.  With Nolen away on vacation during Bletchingly, it will be Mertens doing the honours at Caulfield.

The Group 3 Monash Stakes was Supido’s first stakes victory but Mertens seems confident that this was only the beginning and that Supido was a strong contender indeed and able to do the rider’s career proud.