Weather With You a Definite Derby Possibility 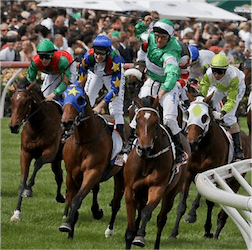 The final field acceptances for all of Flemington’s Victoria Derby Day races on 4 November aren’t out yet, but there are plenty of ante post opportunities already open to online sports betting fans who reckon their favourites are sure to run. Currently at $20.00, 3-year-old Weather With You might be a rewarding bet for the $1.5-million Group 1 VRC Derby over 2500m.

Sired by Irish stallion Teofilo out of Tarique, the Andrew Forsman/Murray Baker-trained gelding overcame soft going to win the 2200m Geelong Classic on Wednesday 25 October. Now on career stats of 6: 1-3-0, he could see his odds shorten considerably by the time the final field is announced.

There are nine horses being offered at lower ante post odds than Weather With You at online sports betting sites, however, so punters may want to see how many of them end up in the final field before they commit to a bet. Top of the betting are Main Stage at $5.00, Cliffs Edge at $6.00, Royal Symphony at $7.00 and Ace High at $8.00.

The other Derby Day race that will be getting loads of attention from punters is the Gr. 1 Coolmore Stud Stakes, a million-dollar sprint for 3-year-olds over 1200m. There are several strong contenders among the 17 nominated horses awaiting final acceptances.

Following solid performances in trials, the colt Viridene has leapt to the top of the ante post betting at $4.50. He’s undefeated in four starts, all of them over 1100m or 1200m. However, the Stakes could just as easily be won by any of the other seven nominees being offered at below $10.00.