Getting Ready for the Melbourne Cup 2017 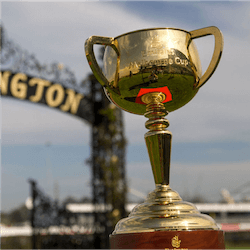 Australia’s most prestigious annual Thoroughbred horse race comes to Flemington once more and this year promises to be one of the most exciting major horseracing events to date.  A number of clear indicators as to what to expect from the race favourites are already present.  We take a look at some of the more important markers.

The English stayer is the new Melbourne Cup race favourite after his stellar performance of having crossed the finish line in sixth place at the Caulfield Cup last Saturday.  What makes 6th place remarkable and something to take notice of ahead of the Emirates Melbourne Cup?  The fact that Marmelo started out from near last and swiftly proceeded to clock the fastest final 800m of all.  What’s more, he managed the stealthy feat going into a turn and charging down the outside of the track, on a day when it was vital to have started out in the first half of the field.

Hugh Bowman is yet to confirm whether he will be the one pushing the five-year-old beater of all odds to yet another worthy performance at Melbourne.

It seems slightly unfair that a good horse should be penalised for winning, but this is the situation staring Caulfield Cup winner Boom Time in the face ahead of the upcoming Melbourne Cup.  Boom Time will be pegged down by all of 53kg in weight penalties after his winning performance at Caulfield.

It is no unusual thing, with the 53kg penalty the same as the weight that was imposed on Viewed (2009), Dunaden (2012) and Mongolian Khan (2015) following their respective victories at the Caulfield Cup.

Boom Time made a day of it at Caulfield by finishing one-and-a-quarter lengths ahead of runner up Single Gaze.  The 1kg penalty that has been imposed on Boom Time translates to roughly two lengths in terms of Melbourne’s 3200m stretch.

Boom Time will not only face his fellow contenders of the Caulfield Cup, but also a group of other worthy runners who did not compete at Caulfield, including defending champion Almandin, US Army Ranger, Nakeeta, Wall of Fire as well as locals Big Duke and Who Shot Thebarman.

Cory Parish is positive that Boom Time has what it takes to seal the deal in Melbourne.  Having afforded Parish his very first Group One win, Boom Time showed his steel as early as the 50 metre mark.  Parish reports that it was already at this point that he knew that the race was safely in the bag.

The Melbourne Cup comes to Flemington Raceway on November 7th.