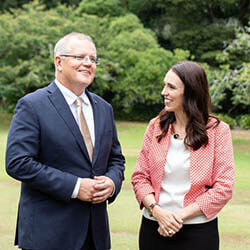 Figures in the Thoroughbred Racing industry are coming forward with support for moves towards opening a travel bubble to extend across the Tasman Sea. It will allow for the important sales trade with Australia to restart. Rangitīkei Member of Parliament Ian Mckelvie, National Spokesman for Racing, was pushed for inside information on border restrictions lifting when he visited key workers in the sector when he visited Waikato this week.

McKelvie was at Woburn Farm, Windsor Park Stud, and the Cambridge Raceway to update interested parties on the Racing Industry Bill set for its second reading soon. He spoke with Justin Sclater, NZ Thoroughbred Breeders’ Association Chief Executive Officer, and Rodney Schick, Principal at Windsor Park Stud while he was there. Both were eager to hear McKelvie’s thoughts on when Prime Minister Jacinda Ardern will be reopening international borders.

McKelvie had no real details to offer, however, saying simply that he didn’t think it would be much longer. He stated that Winston Peters, Deputy Prime Minister, had raised a state-by-state approach to Australian travel, starting with Tasmania. McKelvie explained that the borders opening up will be primarily for horses and people to travel between the two countries because yearling sales won’t fire unless owners and trainers can get into New Zealand.

But, he added, as important as opening the borders is in this regard, this a delicate process around doing so that must be carefully managed. He added that it’s a priority for the country because we’re one of the leading breeding countries of Thoroughbreds worldwide, on a level with Ireland and the United States of America.