Richest Of All: 2018 Pegasus World Cup 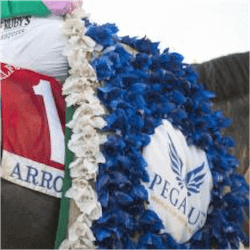 The Two Go Together

The buy-in event will take place on Friday the 26th as well as Saturday the 27th of January, in order to run in conjunction with the Pegasus World Cup.  On Friday players will be required to bet a minimum of $800 dollars on at least five of the races, with Saturday’s minimum requirements being even more hard to come by at $1,000 on the same amount of races and at least a wager of $3,000 on the Pegasus World Cup itself.

No country for poor men, then.

Not A Competition Without Rules

The rules for the Pegasus World Cup Betting challenged have been released and for the first time include a clear stipulation regarding collusion among players.  The combining of entries is strictly forbidden by the rules and players guilty of this particular offense will most probably end up being disqualified altogether.

It is, however, permitted for a player to combine two of his own entries.  The collusion rules do not apply to a single person, only to those opting to go at it together (two or more people).

Navarro Waiting On The Word

Meanwhile, there are still three available spots for the 2018 Pegasus World Cup and Sharp Azteca is laying in waiting to occupy one of those slots.  Trainer Jorge Navarro confirmed that nothing has been decided as of yet and that it did not go about grabbing the last available slots but instead it was important to establish whether Sharp Azteca would be up to the challenge of running the race.

Gallo Stables has issued an official statement, saying that the group was excited to be partnering with Gunnevera at such a high-profile event.