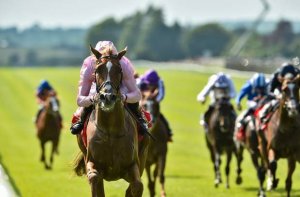 Sovereign has won the Irish Derby after leading from start to finish, beating the Epsom victor and fellow stalemate Anthony Van Dyck into second during the event that took place in Curragh. The 33-1 outsider had left the 5-4 favourite overwhelmed after Padraig Beggy ran a fast pace to win by a total of six lengths.

Aidan O’Brien trains the top three with Norway coming in at third place. Anthony Van Dyck was hoping to become the 19th horse to complete the Derby double. It proved to be a major upset and the audience fell into a quiet whisper as Sovereign crossed the line far ahead of Anthony Van Dyck and gave O’Brien his 13th Irish Derby win.

Sovereign has been expected to be on of the slower racers of O’Brien’s top five runners, and made running with stablemate Norway. Broome, who was one of the better contenders of O’Brien’s was slow of the start buy the two quickly built up a strong lead. The duo were eight lengths clear of the group with four furlongs left on the track. Sovereign, who was 10th at Epsom, managed to maintain his gallop throughout and none of his rivals were able to match his pace.

Anthony Van Dyck was too and a half-lengths ahead of Norway, with Madhmoon just behind, taking fourth place. Ladbrokes had cut the price of Sovereign in half for the St Lefer, and had gone 10-1 for the Doncaster Classic, but Sovereign ultimately defied the odds.