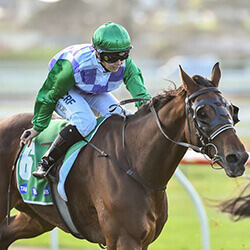 Warrnambool trainer Patrick Ryan has chosen I’ll’ava’alf and John Monash to fill out the first two placings for the restricted steeplechase that’s set to take place on his home track.

Ryan is hoping that the pair may quinella the $350,00 Grand National Steeplechase at Ballarat. I’ll’ava’alf, born and bred in New Zealand, along with apprentice jumps jockey Jarrod Lynch, managed to beat out stable-mate John Monash on a heavy track by more than five lengths, with Mannertone coming in third place.

Ryan has told reporters that he’s looking to talk to owners of I’ll’ava’alf, and hopes that they will give him the go-ahead to send the horse to the Grand National Steeplechase, and that he was impressed with the horse’s last performance on the wet track. He explained that it was a top win for the horse, and that he was also impressed with Jarrod’s performance while riding the horse. Ryan added that he hopes there will be a heavy track at Ballarat.

Tommy Sadler claimed his first win as a jump jockey while riding the Brett Scott-trained Vysotsky, winning their maiden hurdle. Scott told reporters that Vysotsky would be much more benefit far more from a win than Firefree or Bold Bandit. According to the four-time Grand Annual Steeplechase winner, Vysotsky would always make it as a jumper, and that he will do even better as a steeplechaser.