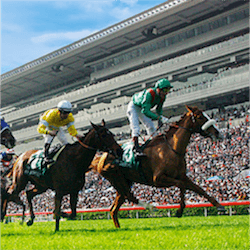 England’s Champagne Stakes over 1414m at Doncaster racetrack, run on Saturday, delivered a tight finish. US horse Seahenge, starting fourth in the betting, won by a neck from Hey Gaman, in turn a neck ahead of Irish race favourite Mythical Magic. The race is a reminder to Kiwi punters that Champagne Stakes also comes up in autumn at Royal Randwick, on 21 April 2018 and bets can be placed online at Sportsbet.

Right now, however, there is still a cornucopia of Spring Carnival racing around the country for online sports betting fans to enjoy. Caulfield has racing this Saturday, but Sydney will be the centre of attention, thanks to Golden Rose Day at Rosehill Gardens.

Five to Watch for at Rosehill

The second race on Rosehill’s card, the 2400m Group 3 Colin Stephen Quality, will test stayers with a tiny field of five. The favourite is New Zealand gelding Broadside, ahead of French gelding Auvray.

The fifth race is the 1500m Gr. 2 Shannon Stakes, with 6-year-old gelding Washington Heights marginally ahead of 4-year-old mare Dawn Wall in the betting. The 1800m Gr. 3 Gloaming Stakes, restricted to 3-year-olds, is next. Two colts lead the betting: Astoria and Sanctioned.

The highlight of the day will be Race 7, the Gr. 1 De Bortoli Wines Golden Rose, a million-dollar gallop over 1400m also restricted to 3-year-olds. There are three colts fancied: at $2.00, Menari is an outright favourite, but Pariah at $6.50 and Merchant Navy at $8.50 are also worth a punt.

The Golden Rose is followed by the 1400m Gr. 2 Golden Pendant, restricted to mares and fillies. Currently, 4-year-old Omei Sword and 5-year-olds Daysee Doom and Bonny O’Reilly are all priced at between $4.80 and $5.50.

Melbourne has an important spring meeting at Caulfield next Sunday, 1 October, on Underwood Stakes Day. The eponymous feature race is the seventh on the card, the 1800m Gr. 1 weight-for-age Hyland Race Colours Underwood Stakes, with a purse of $750,000. The 1400m Gr. 1 Sir Rupert Clarke Stakes should be another thriller: an open handicap with no age, sex or class restrictions.