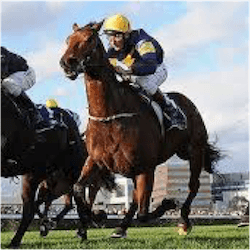 Wednesday’s $300,000 Group 3 Geelong Cup was contested by a strong field of stayers, but the victory went to Mike Moroney-trained galloper Vengeur Masque. It was the Irish-born gelding’s first win since he started racing in Australia in September last year, and at $15.00, he impressed punters by holding off race favourite Gallic Chieftain by a head.

Traditionally, the 2400m Geelong Cup is a proving ground for horses headed to Flemington’s most prestigious two-miler, the $6.2-million 3200m Melbourne Cup, scheduled this year on 7 November. But as it stands currently, Vengeur Masque hasn’t qualified; he’s 25th in line for the 24-horse race on his recent record, and his handicap remains 9.5kg below the weight-for-age minimum in the Melbourne Cup.

If Moroney wants to get him into the field in Melbourne, he has a shot at qualifying if he runs the Lexus on Victoria Derby Day. Punters will have to wait and see if the 6-year-old is an option on 7 November.

If Vengeur Masque does qualify for the Melbourne Cup, his odds are likely to improve from the ante post $50.00 and up that he is currently attracting. If Gallic Chieftain runs, he may also rise to a stronger price than the 5-year-old entire’s current $66.00.

The stallion to watch could, however, be 5-year-old British horse Marmelo, currently leading ante post betting at $5.00-$6.50. He’s on a career record of 3: 1-1-0 since he reached Australian shores, but he’s a proven stayer over the longer distances.

Those odds could change over the next two weeks, of course, and no doubt will, once the final field is confirmed.