Warnings Issued To Those Attending The Kentucky Derby 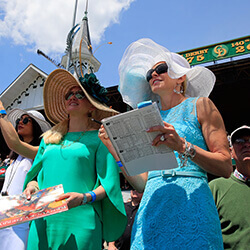 Officials have sent out statements to those coming to the upcoming Kentucky Derby that they may want to take some extra precautions prior to the event.

The Indiana State Department of Health has issued recommendations to residents that they get vaccinated before the Derby begins, especially against hepatitis A. They recommend that steps be taken to prevent getting the illness before travelling to both Michigan and Kentucky, as outbreaks of the infection are predicted.

Over the last few months, over 300 cases of hepatitis A have been reported in Kentucky, with 38 cases having been reported just within the first week of April. Most of the reported cases have come from the area in and around Louisville – the city where the Derby is held every year. The event itself attracts more than 150000 visitors per year, and takes place on the first Saturday of May.

Indiana deputy state health commissioner, Pam Pontones has released an official statement to the public saying, “With popular tourist events coming up in other states, we know many Hoosiers will be travelling to areas impacted by hepatitis A, and we want them to be safe. Getting vaccinated and thoroughly washing your hands before and after preparing food and eating and after using the restroom are simple, safe, and effective ways to prevent the spread of hepatitis A.”

Those that do catch the infection, however, should get better on their own without the need for any medical treatment, but in some rare cases the disease can become much more dangerous.