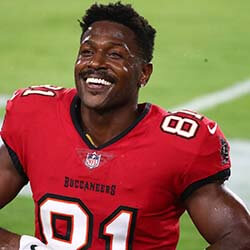 Also suspended on Thursday were Brown’s teammate Mike Edwards, as well as free agent John Franklin III. The latter will not be able to play in the next three games even if he were to be signed by a team.

Brown, currently in his second season with the Tampa Bay Buccaneers, is being accused of having used a fake vaccinations card. All three the suspended parties have reportedly accepted the NFL’s disciplinary ruling and have also waived their right to appeal the decision.

All three players were represented by the NFL Players Association during the recent review by the league. All three face allegations of vaccination status misrepresentation.

According to information released by a Tampa Bay newspaper late last month, the allegation of a fake vaccination card had been made by Brown’s former personal chef. Brown’s legal representative, Sean Burstyn, has however denied the claim and insisted that his client is fully vaccinated.

Burstyn said this week that his client has accepted the NFL’s determination because of a desire to wrap up the proceedings in a quick and time-efficient manner. He said Brown realised that challenging the finding would only lead to a distracting and drawn-out process. He also revealed Brown intended to use the time away from the game to treat his ankle injury, and rest.

Brown’s former chef, Steven Ruiz, apparently told reporters that he had decided to speak out about the alleged fraud after a falling out over unpaid services.