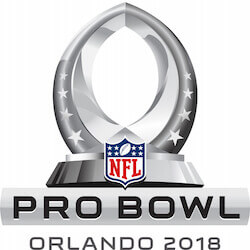 The Pro Bowl has faced many a challenge in the past.  Even sudden death when in 2012 Commissioner Roger Goodell went as far as suggesting complete elimination of the game.  On a less dramatic note, the Pro Bowl is also constantly being shaken this way and that by new suggestions and proposed changes to the rules.

After all, it’s important that folks keep on watching, to draw their interest out.  Especially now ahead of the 2018 Pro Bowl which kicks off on January 28th.

The NFL has obviously realised the importance of keeping things fresh and interesting, most recently by narrowing the goal posts post-2014.  You know, to test the kicking capabilities of some of the NFL’s best boots.

We take a look at a number of alternative suggestions that may actually, you know, work.  Because folks enjoy the game much more when things work.

What if a catch were a catch were a catch?  Eliminating the rule that the ball had to be controlled all the time whilst on the ground would require officials to be more on the ball, so to speak, and to make more subjective calls regarding whether the ball was secure, or no.

And how about widening the field to accommodate players better?  Perhaps a slightly laughable idea, but one that was actually circulated among players in 2011.  In that same year it was discussed as a viable option in order to secure player safety.

Whichever way you look at it, and it’s possible to come up with many more suggestions than these humble ones, the Pro Bowl has reached a type of impasse.

The time to shake things up is now.

The 2018 Pro Bowl will once again feature a play-up between the AFC and the NFC.  Each conference will, as in the past, be led by two Legends captains: one on the defensive and one on the offensive.  Hall of famers Derrick Brooks, Warrick Dunn, Jason Taylor and LaDainian Tomlinson have been announced as this year’s Football Legends captains.

The AFC will be led by Tomlinson and Taylor and in camp NFC will be Dunn and Brooks.  The Legends captains will serve as mentors to the Pro Bowl players and will be present on the sidelines during play.

The action kicks off at 3 p.m. on gameday on January 28th and will be televised by ESPN and ABC.