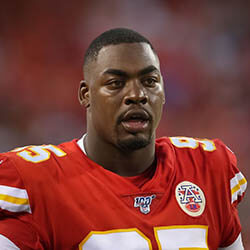 Chris Jones is an outstanding defensive lineman for Super Bowl champions The Kansas City Chiefs and the team has until the 15th of this month to work out a way to hold on to him. Jones wants US$20 million per year or he won’t play and if the squad doesn’t pay up it may be a long time until they see this supremely talented player on the field again.

Reports have indicated that Jones has long believed he’s worth at least US$20 million a year but his team doesn’t agree, failing this far to offer him anything near this amount. This means that there’s some serious work to be done for a long-term bargain to be struck and there’s some doubt that it’s going to happen. When Jones heard reports that a holdout might be on the horizon he took to Twitter to announce that he won’t play if he’s not properly paid.

Le’Veon Bell famously held out for the whole of the 2018 season while he was playing for the Pittsburgh Steelers when he wanted more money. It ended up in his being released and signing a magnificent deal with the New York Jets. The 25-year old Jones is set to make just over US$16 million during the 2020 season on the franchise tag and there are currently only two other defensive tackles making more than US$20 million a year, Aaron Donald from the Los Angeles Rams and DeForest Buckner of the Indianapolis Colts.