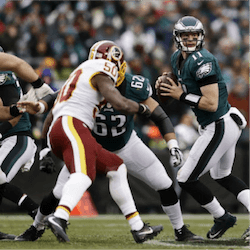 There’s no denying it: Carson Wentz is the unstoppable force of Monday night football.  The Philadelphia Eagles’ star quarterback really diced things up for a seemingly unsuspecting Washington.  It was difficult getting off the ground at first, but as soon as he got going, Wentz racked up 268 yards, 4 touchdowns and 1 interception en route to a 34-24 victory for the Eagles.  The stellar performance was all the more so due to the rocky start.

The rocky beginning included a completion of only 3 out of 8 passes for 30 yards, with the difficulty continuing well into the second quarter.  Not to mention that almost fateful interception on Philadelphia’s opening drive.  All’s well that ends well though, and when Wentz finally got going, Washington’s problems were only getting started.  Two touchdowns drives before half-time and a third as an opening act to the second half set the Eagles firmly on the path to victory.

Monday night saw the Eagles soar to a fifth consecutive win and a new milestone NFL record of 6-1.

Monday night was a direction-setting event for rookie Mack Hollins, having capped the maiden touchdown for the Eagles, who had really been having a battle of it before the magic throw.  Certainly a sterling way to kick off a bright career in football.

It’s not every rookie who manages to haul in a 64 yard touchdown pass during high-pressure play.  The fact that he rode his bicycle to the stadium makes him just all that more likeable and easy to root for.

How About That Kirk Cousins Curse

The Washington quarterback just cannot seem to score on a Monday.  Officially now on 0-6 as a Monday night starter, Cousins now holds a record for all the wrong reasons:  no active quarterback has a longer losing streak on Monday night football.

That having been said, Cousins is not the star loser either, having completed 30 out of 40 passes for 303 yards, 3 touchdowns and 1 interception.  It’s not that Cousins is playing bad football, and a performance like his is usually enough to make for a win, just not on a night composed by Carson Wentz.

Taking More Than One Hit

It seems that Monday night wasn’t the last of Washington’s woes as both Brandon Scherff and Morgan Moses fought a battle of another nature all through the evening.  Both players were notably in pain as result of injuries. If you missed betting on this game, you can still get in on upcoming NFL action at Sportsbet!