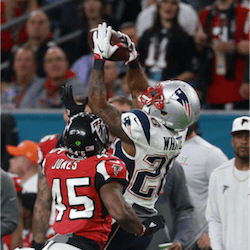 By the end of Sunday night’s brawl it had become abundantly clear that the Falcons are but a shadow of their former selves.  After all, it takes a lot of (un)doing to lose the first overtime contest in the history of Super Bowl.

For the Patriots however, it was a case of having risen from the dead, as they had obviously managed to iron out all that had been plaguing them for the entire early part of the season.  No surprises either, as Tom Brady had a strong defence to compliment him for a change.  By half-time, it was quite obvious that these were not the same to teams who met in Houston during February of last year.

Speaking to the press, Brady said about the defence support that it had been a story of complimentary football, with everyone pitching in and contributing to the victory.  It was an entirely different story in camp Atlanta.  Brady and his support staff all but ripped through the Falcons, mixing it up with runs and passes, generally sowing a great deal of confusion.

It Wasn’t Always This Way With Atlanta – Or Was It?

There’s nothing of 2016’s offence left in Atlanta.  Never is this more apparent than when you find yourself within the Patriots’ 1 with 2 downs to score and proceed to throw an incomplete pass and attempt to run the rest of the way with 2 downs and 12 inches to go.  There’s no place for antics in a situation like that, but don’t be asking Atlanta for any advice on the matter as they are doing it differently.

The unconventional wisdom effectively cost Atlanta their last chance to get back into the contest.  Whether or not it was sheer desperation from Dan Quinn, it looked like gutsy decision at first, but it soon became apparent that the dividends of bravery were often the pay-off for stupidity instead.

Then again, Atlanta did go into half time lagging behind at 17-0, with desperate times calling for desperate measures.  And really, you win some, you lose some.

For New England it was a matter of handling the mistakes of the Falcons, instead of actually having to put up much of a performance of their own.  Crisis control and disaster management become interesting terminology when you’re doing it on behalf of someone else.

New England has effectively made it back to safety after having been described as a collective disaster for the most part at the beginning of the season.

The ultimate pay-off for their efforts: a 23-7 win and the hope that says, it ain’t that bad a season after all.