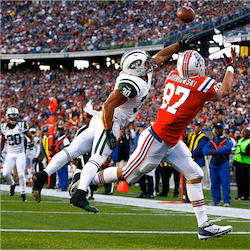 This was in many ways a case of getting a whipping even before the ball is properly in play, for the Bears in anyway.  It was a real struggle to gain yards right from the start, with Jordan Howard trying to plough through stacked and loaded fronts and having no help on the follow-through.  Wide receiver Markus Wheaton was called out for offensive holding on to the play and as such Howard’s nifty dash for the end zone never got off its feet.

Viking Kai Forbath had managed his guns just right, kicking a 26 yard field goal with only 12 seconds to play.  For the Bears it was a rookie start for quarterback Mitchell Trubisky.  The gamble on the April draft panned out rather well when the newbie ended up completing 12 out of 25 passes for 128 yards and including a touchdown and an interception in his opening repertoire.

The interception, especially, proved very useful, putting the Vikings on the Bears’ 28-yard line and ultimately leading to the field goal that won the game and forced the Bears to absorb a 20-17 loss.

It’s been a season that has been plagued by injuries right from the start for Philadelphia Eagles cornerback Ronald Darby.  September 10th pretty much marked the beginnings of his troubles as he suffered a serious injury to his foot when the Eagles went up against the Washington Redskins in the season opener.

Darby’s loss – for what is expected to be for the rest of the season – deals a great blow to the Eagles.  Darby was acquired earlier this year in a trade that saw the back of Jordan Matthews. 23 year-old Darby has played a total of 29 games for the Bills over the last two NFL seasons and has managed to total 2 interceptions and 137 tackles.  What makes Darby a true contender is that he is strong against the run, earning him the ranking of 11th best run defender among cornerbacks for last season.

What’s more, Darby had managed to impress right from the start, having had an exceptionally strong rookie season, earning him a naming in the Pro Football Writers of America’s All Rookie team.

A month down the line after the fateful injury to his ankle, Darby is still out of play and for all practical purposes, may very well be for a foreseeable portion of the season.  This doesn’t bode well for the Eagles by any measure.