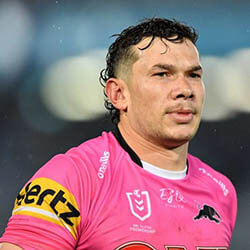 The NRL has provisionally suspended Penrith winger Brent Naden from participating in any sport classified as WADA-compliant. Naden reportedly failed an anti-doping test conducted after the club’s devastating final loss to the Storm. According to a statement issued by the league, the star winger tested positive for metabolites of cocaine.

The drug is prohibited by both by the World Anti-Doping Agency (WADA) and the NRL’s own Anti-Doping Policy.

The Panthers have in the meantime acknowledged Naden’s NRL suspension via a statement of its own. Naden reportedly approached the club for help following the 2020 NRL Grand Final and furthermore also admitted to the use of a recreational drug. He has since completed a voluntary program at a rehabilitation facility and enjoys the full support of the club during the process of recovery, confirmed the statement.

The club again reiterated its intention to support Naden as he continues to address his personal issues with the help of his family, friends, and Panthers staff. The club said that it believed that by supporting Naden and working closely with him throughout the rehabilitation process, it would ultimately help the winger overcome his personal issues as well as realise his full potential as a player.

Naden earlier this year became the victim of racial abuse and was left shaken following an incident involving spectators present at a Panthers game in Gosford. A total of eight people were ultimately ejected from the match and from Central Coast Stadium. The group reportedly twice took verbal aim at the Indigenous player.