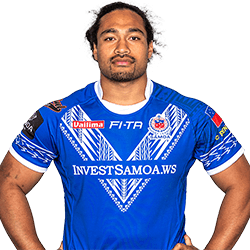 Warriors prop, Bunty Afoa, has resigned with the Warriors until the 2023 NRL season ends. The two-year contract extension will see the 24-year-old on track to make 100 appearances for the club since his debut in 2016.

The team is excited to have Bunty stay on for the next two years. Bunty joins Tevaga in renewing his contract and helping the team succeed during this time. These two players had previously been listed as the club’s grand final-winning under-20 side in 2014 and have since gone on to grow and develop their talent to the team’s benefit.

This progress shows no signs of slowing down, leaving the team and fans alike excited to see how Bunty continues to excel on the field. Bunty currently averages 32 minutes of play time and makes almost 70 metres and 22 tackles a game. He has made 244 successful tackles to date – only missing four. This skill and determination are impressive to watch, and those who have been following his career will note that this is a passion that continues to grow.

The resigning only makes sense, as the club has been an important part in growing and developing Bunty’s skill – and continues to do so. This is a great example of how talented our local sports stars are, as well as how important it is to sign with a team that acknowledges this and does its utmost best to ensure that it continues to do so.