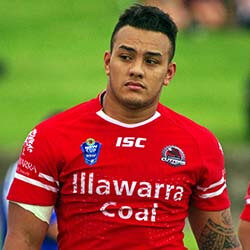 Chances are good new Warriors signing Addin Fonua-Blake could miss the remainder of the NRL season due to a serious injury to the rower’s knee. According to a recent medical report, the marquee signing’s injury might be far worse and long-lasting than initially anticipated.

Fonua-Blake sustained the injury during last weekend’s game against the Roosters. The initial expectation was that the star prop would require no more than eight weeks on the sidelines, but this is beginning to look highly unlikely given the latest development.

According to a report published by an Australian news broadcaster, the prop may very well require surgery – which may mean the potential end to his current season. Although the Warriors have not yet commented on the situation, Phil Gould has in the meantime confirmed on Twitter that the player indeed faces a “long road back” following the latest news regarding the severity of the injury.

Also alluded to by Gould is an expected protracted period on the sidelines. Gould tweeted that the latest Warriors addition has been a wonderful signing for the club, but that even so, his temporary absence may create an opportunity for another player to step up to the challenge.

Thursday saw assistant coach Justin Morgan revealing that the club will not be rushing any decisions over the injured player’s recovery or plans for the immediate future. Morgan said the team is currently waiting on more detailed feedback from several medical and surgical specialists, and that the decision that will be made will be the right one.