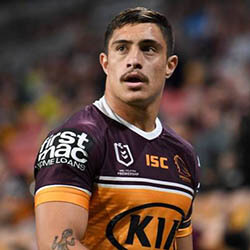 A video showing Broncos centre Kotoni Staggs in a personal and compromised position has been described by the club as footage that is part of a revenge porn scandal. The video has apparently been circulating far and wide on social media ever since it a couple of days ago emerged seemingly from out of nowhere. The club in a recent statement describes the video to be of a personal nature and released without the consent of Staggs. The club also confirmed that it started working “closely” with the NRL’s Integrity Unit right from the moment it first became aware of the video’s existence.

It is at this point understood that the Broncos centre has not had any hand in the release of the video and furthermore, that the woman responsible for the public release of the footage has been identified and is currently being investigated. The wrongdoer, if found guilty, will in all likelihood be charged and made to serve and/or pay some form of penalty.

The Broncos are in the meantime currently stuck in the number 15th position on the ladder of progression resulting from a season right out of the stuff that nightmares are made of. Not only is the club hanging on by the final tethers of what remains of its former dignity, but so is coach Anthony Siebold – by the final tethers of his job, that is.