Cartwright Stood Down After Refusing Shot 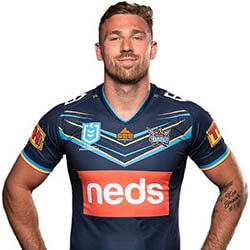 Enormous efforts are being made by the National Rugby League (NRL) to get some sort of action going, even as the world health crisis persists. As a precautionary measure, the organisation insisted that all three Queensland clubs receive a flu vaccination, adding that it was compulsory for every player, before training and play would be allowed. Following this announcement, it was reported that three Gold Coast Titan players would be getting stood down for refusing to receive the shot.

Bryce Cartwright and Nathan Peats are two of these players.

In more detail; the NRL explained that 32 players and 18 staff were required to receive the shot. Though, this measure was not specifically their choice, but had instead been mandated by the Queensland government. The Titans, Cowboys and Broncos had all been handed the same condition, it added, before being allowed to return to the field.

But soon after this announcement Peats took to Twitter to offer further reasoning behind his refusal. He stressed that he had no anti-vaccination agenda, but had instead refused to receive the shot due to a previous bad experience. He concluded that he would be getting the shot after all.