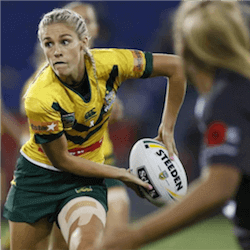 A new age is dawning on the NRL, most recently with the projected launch of a new women’s competition, following the immense success of the Rugby League Women’s World Cup. A flood of interest has prompted organisers to extend the initial deadline for the application for licences from February 1st to February 16th. Clubs now have an additional fortnight to finalise their proposals and applications.

The competition will be played in a double-headers format and will lead up to the NRL finals series.  Strife for the licences is already rife, with clubs vying for an opportunity at the exposure. The NRL have however announced that only six licences will be issued, with preference to be given to teams geographically spread out across New Zealand and Australia.

This almost automatically has one licence in the bag for a team from Queensland and one for the Warriors. A regional-based team in NSW or the ACT is also on the cards, leaving precious little room (2 licences, to be precise) for anyone in the Sydney metropolitan area.

The expanded women’s program will also include a once-off State of Origin match between New South Wales and Queensland to be played in June.

Interest in the licences will more likely than not far outnumber the available licence tally, but this is not necessarily a bad thing. The NRL will most likely follow in the highly successful footsteps of the AFL women’s competition and expand in leaps and bounds within the first couple of years.

The AFL women’s competition organisers plan to add two more teams to its existing band of eight, and further increasing the total tally to 14 by the year 2020.

Warriors Ready And Eager To Join In

Meanwhile, New Zealand Warriors CEO, Cameron George, has confirmed that the Warriors are in the process of tendering for one of the coveted licences. He said that the Warriors were keen to join in and that it would serve a great purpose in favour of the game as well as the Warriors brand. George added that it was important that one’s own back yard be in order before attempting to move forward, but that he believed that the time was right for the Warriors.