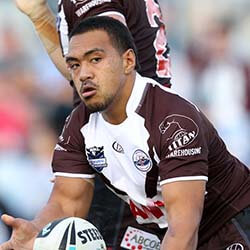 Samoan International and former Panthers and Wests Tigers hooker Masada Iosefa has died. Iosefa died Monday night, on the eve of his 33rd birthday, after he was fatally injured in a quad bike accident. Born in Samoa, he was set to captain Rockhampton this coming season. He moved to Sydney with his family at a very young age, and completed his schooling at Blacktown’s Patrician Brothers’ College.

During his time playing for the Panthers, he made a total of 43 appearances. This was between 2008 and 2011. After his stunt at Penrith, he played for Wests Tigers for a season in 2012-13. In addition to club rugby, he played two tests for Samoa, and was a member of the New Zealand World Cup getup. Iosefa is also a former Junior Kiwi.

According to police reports, the former hooker died as a result of a single-vehicle crash on Mckinlay Road, Herbert. Police arrived on the scene after a passer-by happened unexpectedly upon the crash scene at around 21:00 on Monday night. Police detectives who attended to the scene of the accident have in the meantime confirmed that it appears as if the 32-year-old had lost control of the bike around a bend, which eventually led to the vehicle colliding with a guard rail and rolling. Police have furthermore indicated that Iosefa had not been wearing a protective helmet at the time of the crash.

Penrith have in the meantime paid tribute to the former player in a statement issued on Twitter.