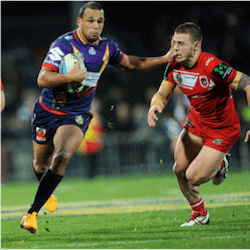 This weekend is filled with NRL action. Take a look at who is playing who and what NRL fans have in store.

The Knights have won only 3 of their matches for the entire season.  This, more than anything, is bound to be the driving force that will be egging them on for a win against New Zealand Warriors on August 5th.

The Warriors, in turn, have had a shockingly dismal season – missing the finals yet again and currently on a four-match losing streak ahead of the game on August 5

It remains to be seen whether there be wind in the sails of the Titans yet, after having been taunted by defeat to the point of infuriation.  Titans fans are desperate to see their team turn things around against the Brisbane Broncos on August 5.

Canberra Raiders will have to bring nothing short of an A-Game going up against rivals Cronulla Sharks on August 5.  It must also be mentioned that the Sharks have been fighting an uphill battle of late – winning just 5 of their 10 games on home turf.

The Manly Sea Eagles will have to lift themselves out of the mud on August 5 – if they have any hope of preventing a third consecutive loss when going up against the Sydney Roosters.  The Roosters have been making steady progress towards a top two finish for the season.

The Panthers are gunning towards a position amongst the top eight – and will be hoping to continue the sterling winning streak of four when going up against the Tigers on August 6.