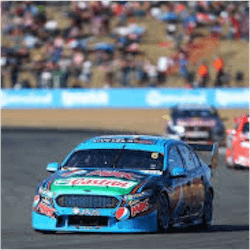 Mostert And Prodrive Racing Australia Get Their Gear On

Ford’s Chaz Mostert on Sunday beat fellow Ford driver and race favourite Scott McLaughlin to the post at Ipswich Supercars – securing his second race win this year.  Mostert seemed notably relieved and understandably so since he has been gearing forward and trying to rebuild his career since a nightmare accident in Bathurst in 2015.

Mostert came away with only a broken leg and broken wrist, but it was enough to put the Prodrive Racing Australia star’s career on hold for all practical purposes.

Mostert believes that Sunday’s victory at Ipswich as indicative of fact that he and Prodrive Racing Australia were getting their guns back on.

The race initially presented with a poor start for race favourite McLaughlin, allowing the tide to turn in Mostert’s favour.  An early, wobbly pit stop almost made for a spanner in the works – setting Mostert back by a bit and allowing McLaughlin to regain some time.  Mostert, however, managed to hold on to the lead, with McLaughlin finishing in second place.

Despite the disappointment of a second place, McLaughlin did manage to leave Ipswich with an overall lead of 129 points, in the standings.

McLaughlin Within Arm’s Length Of Armor All Pole Champion Award

2017 marks the 12th time that the coveted Armor All Pole Champion Award has been given out, and McLaughlin is the likely man to clinch it this year.  In the scope of a streak of fourteen races, the Ford driver has started from either second position or pole position, in every race – a feat hailed by Aaron Noonan as being unmatched in the current Supercars era.

Qualifying for pole position in this coming Saturday’s race at Sydney Motorsport Park will place McLaughlin right on par with Johnson’s fifteen consecutive top-two starts during the 1981 / 1982 seasons.

McLaughlin has also steered DJR Team Penske out ahead of Team Prodrive Racing on the teams’ pole position scorecard.