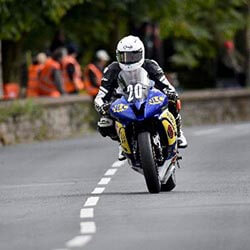 James Hind has claimed a second win at the Manx Grand Prix just a day after winning the first round of the event. Hind had been driven straight to the end by Francesco Curinga, but the 19-year-old appeared relaxed and won with an 11-second margin. The results of the race were exactly the same as the previous day, ending with Dave Butler in fifth. Newcomer Andrea Majola made a powerful run to take fourth place in his first complete race after breaking down during his debut.

There was no rest for those who competed during the two-day event, with the program of the final day carried forward due to the poor weather that had been forecast. Organizers also trimmed the Lightweight race as they did the day before from four to three laps. Blue skies welcomed the participants at the grandstand, but in other areas of the course they had to contend with a strong wind. Conditions made matching the speed of race one difficult, but on lap two Hind posted a fastest average of 116.19 mph. In Glen Helen’s first segment, Curinga was constantly fastest, but Hind patiently got the time back over the remainder of the 37.7-mile course.

Butler had a lonely run and ended behind the leading duo by 66 seconds, while Majola crossed the line after another 56 seconds. A shocked Tom Snow defeated Radley Hughes by 44 seconds in the two Ultra Lightweight race to claim his first win.