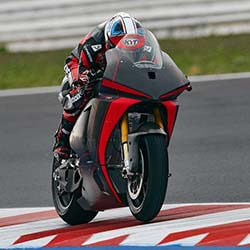 Ducati has finally unveiled its new MotoE electric racing prototype. Codenamed “V21L” the bike will be making its big debut in 2023 at the FIM Enel MotoE World Cup.

The prototype is the result of a joint endeavour between the Ducati Corse team and Ducati’s R&D engineers, which was led by Ducati eMobility Director Roberto Cane. While the technical details will be kept under wraps for now, the bike has been described as feeling quite similar to a typical combustion MotoGP bike. According to Ducati test rider Michele Pirro, the prototype is exceptionally light and offers a good balance to the rider. Pirro also liked the ergonomics of the bike to those of a MotoGP bike.

The only real difference is in the sound. The bike is apparently a silent ride.

The fact that the 2023 Ducati racer and the current Energica Ego Corsa design share similar attributes and fairings likely means the Italians aren’t designing a new machine from the ground up. Ducati has however come into the project with a whole new swingarm, frame, and rear suspension.

Ducati has been named the official supplier of MotoE bikes until 2026.

According to the Italian manufacturer, the biggest challenge is the weight of the prototype when fitted with the batteries. To help balance the issue of weight with performance, Ducati has developed an all-new cooling system focused on the objective of lightening the load.

Since lightness has always been a feature associated with the Ducati brand, this is bound to remain a priority during the lead-up to 2023.