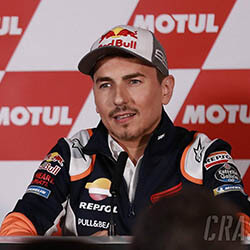 Spanish three-time MotoGP winner Jorge Lorenzo has announced his retirement from the sport after the season comes to an end. Lorenzo was the champion in 2010, 2012, and 2015 during his time with Yamaha, and also won two world titles at 250cc in both 2006 and 2007. The 32 year old made his MotoGP debut in 2008, and went on to win 47 races, landing at fifth place on the all time list, and finishing on the podium 114 times from 202 different starts. He has joined Repsil Honda for the 2019 season, and is currently 19th in the standings.

Talking about his upcoming retirement, he said that the day had finally arrived, and that his next upcoming race will be his last. Lorenzo, who still had another year on his contract with Honda, had suffered from a number of injuries and his from for this season. He had missed four grand prix events after crashing and damaging vertebrae during a practice at the Assen Grand Prix in June. He said that he loves this sport and winning, but that he has let himself down and have let his team down, but remains adamant that his retirement is the best decision for him and his squad. He finally added that they are both winners and that they always have to fight for victory.

His leaving the Honda side means that there will be a vacancy alongside fellow Spanish rider and six-time MotoGP winner Marc Marquez.