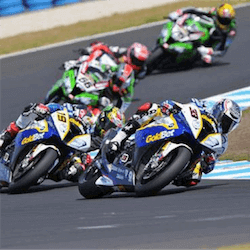 The 2018 World Superbike World Championships kicks off this month on the 24th and the first race finishes on the 25th. It marks the 31st running of the event with the first race taking place on Phillip Island in Australia. The country has already held a press conference celebrating the event.

Last year Brit Jonothan Rea racing for the Kawasaki Racing Team took home the gold here in Phillips Island as well as at the next event in Thailand, going on to win many more races in the Superbike calendar. Between Rea and fellow Brit and teammate Tom Sykes, Kawasaki has been a dominating force, with little set to change in 2018. Rea has already said that testing on the first track on Phillips Island has been going great and he and the team are itching to go.

2017 was quite a notable year for a few reasons. First was the untimely death of Nicky Hayden who sustained serious injuries after a cycling accident in Italy. The second notable factor was the revision of certain rule sets. The second race starting format was changed.

World SBK Exec Daniel Carrera stated that the Phillips Island track is the perfect kick off to the Superbike World Championships thanks to its great location, atmosphere and history.

Entrants To The 2018 SBK World Championships