Up and Coming Stakes This Weekend 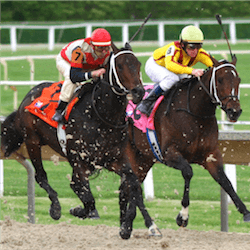 Trapeze Artist To Return At Up And Coming Stakes

Gerald Ryan is launching an all out attack this Spring. After Menari won the Listed Rosebud ,Ryan’s 3 year old Trapeze Artist will be taking on the Up and Coming Stakes. So far Trapeze Artist took a 6th in the Golden Slipper, won the Black Opal Stakes and took a third place finish at the ATC Sires Produce Stakes.

As preparation for the Stakes this weekend, Trapeze Artist has ran two barrier trials and finished in second place in each. As Ryan stated, Trapeze Artist is a very relaxed horse and only runs when he has to, meaning that his performance will improve at the event itself.

Of the 13 entries announced for the Up and Coming Stakes, Trapeze Artist is the highest rated competitor and will be carrying a 61kg top weight.

Assimilate and Dracarys are the two nominees put forward by Team Snowden. Assimilate has shown great improvement in his last few runs. He won at Kembla Grange and in Randwick, further confirmed by Snowden who has been putting a lot of work into Assimilate.

Snowden stated that they knew right from the start that Assimilate has great potential but it took some time to get his head in the game. Assimilate is part of a colt syndicate that features 20 yearlings, including the well known Invader. Of those 20 yearlings, 8 have been winners so far, Assimilate being one of the 8.

Currently according to most bookmakers, the top 5 contenders are Calculated, Sanctioned, Trapeze Artist, Dracarys and Assimilate.

Calculated, Sanctioned and Trapeze Artist gets odds of between 4 and 5, thanks to their solid records so far. From behind Dracarys and Assimilate get odds of 7 to 9 which is also a great bet.

The Up And Coming Stakes Nominations

The Up and Coming Stakes is a Group 3 race that is limited to 3 year old colts and geldings. It is held as part of the Warwick Stakes Day event which is part of the over arching Spring Carnival.

The Up and Coming Stakes will take place on the 19th of August, Saturday. The race covers 1300m and offers a prize pool of $125 000. It is one of the Randwick Racecourse’s most prestigious events.