It’s Dovizioso Vs Marquez At Valentia 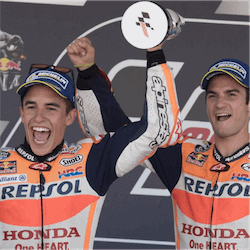 Dovizioso And Keeping The Dream Alive

Andrea Dovizioso is well on his way to winning his 1st MotoGP world championship ahead of the Valencia Grand Prix on November 12th.  Winning the Malaysian Grand Prix and his sixth race this season has insured that its now all down to the final leg of the MotoGP season for the year.  The Italian has effectively narrowed the gap between himself and season leader Marc Marquez to a measly 21 points.

Marquez proved more than capable on a wet Sapang circuit in Malaysia, after having crashed out heavily during practice.  He remains in a commanding position to win his fourth MotoGP world title in five years, but has Dovizioso biting firmly and often at his  heels.

The Price To Pay

If Dovizioso wants to win his first world championship title and pip Marquez to the proverbial post on 12 November, he will have to win the Valencia Grand Prix.  There is absolutely no margin left for error.  A second place finish will mean a second place overall for the year.

Dovizioso was back to true form in Malaysia, having set the pace in Malaysia whilst Marquez went off the track twice.  Speaking to the press afterwards, the Ducati rider said that he had been very happy with his performance and that he had been pleasantly surprised at the time clocked around the track.  He went on to say that the fact that he performed so well under wet conditions confirmed what he thought that he had learnt from last year’s F1 season and that he thought that this bode very well for the upcoming race at Valencia.

Marquez, on the other hand, needs to score 5 points if Dovisioso does win the race.  This translates to no further back than 11th position overall at Valencia.  And so the scale continues: if Dovizioso finishes in 2nd position Marquez must in 5th position or lower in order for his championship title dream to stay alive.  In the event that Dovizioso finishes 3rd, the Spaniard must ensure that he finishes in no worse than ninth position to seal the 2017 deal.  4th place for Dovisioso translates to no worse than 12th position or lower.

On a more personal victory note, Michael van der Mark will be making his return to the MotoGP scene for team Tech3 Yamaha at Valencia.  This in the absence of Jonas Falger who has been taken ill and unable to ride as a result of having contracted the Epstein Barr virus.