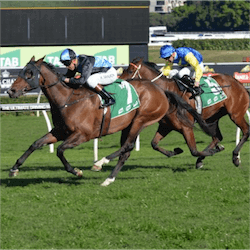 Ron Quinton already has high expectations resting on the performance of Winx this coming weekend, but he also has two potential stars, namely Daysee Doom and Dixie Blossoms.

These two mares have shown great potential and they are returning to professional racing after a break taken to rest up and train.

Daysee Doom is making her return at the 1200m Show County Quality after she won the Dark Jewel Classic earlier in the year.  She has been out of racing since mid-may but she seems ready for the weekend’s action. She trialled in August against Winx and finished only a length behind it.

Quinton went so far as to say that if her trainer, Andrew Adkins pushed her harder, she could have beat Winx.

Dixie Blossoms will be competing in the Toy Show Quality this weekend after she won the Guy Walter Stakes in February. She has already shown impressive form during her trials so she stands a good chance in the event under the tutelage of Quinton.

Boss Lane, who was also trained by Quinton, will also be taking part in the Show County Quality. The 6 year old has had some fantastic performances at Randwick having broken his previous race drought at the course earlier in July. Boss Lane more than likely will go out with his regular rider, Andrew Adkins.

Of his 9 career wins, 7 have been at Randwick so clearly Boss Lane has a feel for the course, making him a great contender on Saturday.

Tony Gollan will also be returning Most Important to the racing fold after it finished in a respectable 5th place at the Magic Millions in January. Since then Most Important has been taking a much needed rest and recovery break.

His accomplishments in 2016 include a win at the Summer Sprint Triple Crown at the George Moore Stakes, a Group 3 event. He also took wins at the listed Lough Neagh Stakes and the Listed Buffering Quality.

Gollan then avoided straining Most Important at the winter events and let him rest up to attack the Spring line up.  A competitive horse like Most Important will be absolutely rearing to go this weekend at the Show county quality.