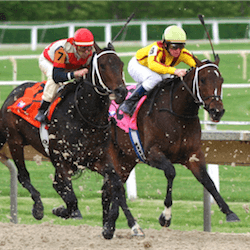 There are some fantastic races ahead for the next two weekends with top competitors in the field.

Set for the 9th of September, the Dato Tan Chin Nam Stakes has a prize pool of A$250 000. New Zealand training partners Andrew Forsman and Murray Baker will be running Bonneval and Lizzie l’Amour, both Group 1 winners.

Abbey Marie from trainer Mick Kent will be showing her potential as well. Kent is hoping she lives up to her mother Redoute’s Choice.

Also on the 9th will be the running of the 1000m McEwen stakes. Favouring sprinters, this event will have an A$150 000 in prizes. Darren Weir has confirmed he will be running Hellbent and Voodoo Lad.

Of the two, Hellbent has shown that he can handle a sprint but Weir seems to be trying to get more out of him than he has in his tank.

Voodoo Lad however has had multiple wins in the stakes and received a placing in the 1200m Newmarket Handicap this year.

The 1600m, A$250 000 Chelmsford stakes is being run next weekend at Randwick. Everyone’s favourite, Winx will be making her appearance at Chelmsford. She is coming off 18 successive wins. She is getting odds of 1.08 and higher meaning that we are witnessing a potential legend run.

She comes off a win at the Warwick Stakes last week. She has been warming up for the race at Rosehill and she should leave the competition in the dust once again.

Taking place this weekend on the 2nd, the 1200m Furious Stakes a have granted mare Alizee an inside barrier start, much to her trainer’s delight. She will be out to defeat rival Formality who narrowly cost her the Silver Shadow Stakes two weeks ago.

Trainer James Cummings feels this could be just what the mare needs to edge ahead of the dogged Formality. Joyfilly Yours and Champagne Cuddles will also be joining the field at the Stakes.

Kris Lees is hoping Invincible Gem could walk away with two wins in a row after she drew a mid barrier for this weekends’ A$200 000 Tramway stakes at Tattersalls.

Gerald Ryan will be running Deploy and Washington at the stakes.

This weekend also sees Randwick featuring the Concorde Stake. The 1000m A$150 000 race will feature the clash of Redzel and Spieth who are battling to make it into the Everest, the final event of the spring carnival.

Paul Snowden has full confidence in his two powerhouses who have performed great so far this season.