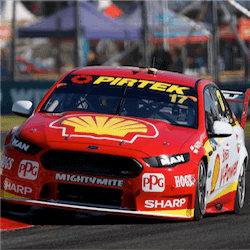 Drivers joined former NRL superstar Corey Parker at Ronald McDonald House South East Queensland on Wednesday ahead of the 2017 Coates Hire Ipswich Supersprint, set to take place on the weekend.  Ronald McDonald House South East Queensland is the official charity partner of the Ipswich Supersprint – with the proceeds from various events on the day going towards the children’s charity.

Warburton made reference to the valuable work that was being done by the Ronald McDonald charity in Brisbane, saying that the charity homes offered refuge to many families having nowhere else to go in times of need.

2017 will mark the 21st time that the Queensland Raceway has hosted the Ipswich event.

The Men Who Will Be Hot-Wheeling It At Ipswich

Championship leader and Kiwi favourite Scott McLaughlin will be burning it up a mere six points ahead of Triple Eight’s Jamie Whincup – both men are firm favourites to walk away victorious. McLaughlin is on a winning streak of twelve front-row qualifying finishes – a record in the modern Supercars era.  Qualifying form can mean the difference between winning or losing at Ipswich – mainly due to the limited leeway available for any dare-devil breakaways on the 3.12km stretch.

McLaughlin is the face of humility ahead of race day on Saturday, saying that the status of top dog did not make much of a difference as far as his mindset was concerned, and that there were many races to go yet in the 2017 Supercars Futures season.

The Kiwi is bound to reap the rewards of being especially familiar with the Queensland Raceway – being his home track.

Practice rounds will commence this coming Friday – with racing taking place on Saturday and Sunday.