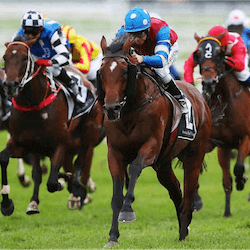 Murray Baker is a man who needs no introduction, especially not in horse racing circles, having consistently produced stellar results on the horse racing track for the last two decades.  Baker has saddled up over 100 winners at stake level, with more than a dozen of those at Elite Group 1 level in Australia.  Baker’s stables are located in Cambridge – the horse capital of New Zealand.  Baker has recently teamed up with junior trainer Andrew Forsman, and together they represent a remarkable team.

Baker celebrated his 20th Australian Group One win in Sydney in April of this year.  It was Bonneval who claimed the number one spot for Baker, and it will be Bonneval racing at this year’s Caulfield Cup on October 21st.

Bonneval will be joined by two more Group 1 winners from Baker’s stables – Jon Snow and Lizzie l’Amour.    Eleonora, who finished in third place at the Oaks, will also be joining the forces.  Baker seemed confident about Eleonora’s chances, saying that she has only had 10 starts – and winning 3.  She only missed a place once as a result of being held up in a bad way.

But it is Bonneval who is really drawing the attention this year – having aced four consecutive wins as her 3-year-old season drew to a close.  Baker is of the opinion that this puts Bonneval in the running for the prestigious New Zealand Horse of the Year award.

In the meantime, Mick Kent is readying his Abbey Marie for Caulfield.  Abbey Marie was last year’s Group 1 Australasian Oaks winner.  Abbey Marie unfortunately suffered a couple of health issues after Oaks as a result of an infection, and had to sit out for the rest of last year’s Spring season.  She was up and at it again during Autumn of last year, managing to secure fourth place at the Mannerism Stakes.

She unfortunately suffered a hamstring injury shortly after, hampering her overall performance quite a bit.  Kent said that he was hopeful that Abbey Marie would rise to become the best in her class once more – and that he was feeling positive and preparing her for Caulfield at a pace that suited her.  He went on to say that he felt confident that the time of rest had done her a great deal of good, and that she would be back stronger and fitter than ever.