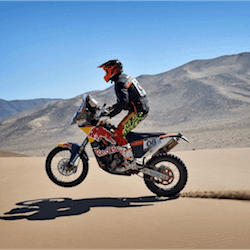 Bringing Enduro Racing Out Of The Dark

If Price were to successfully compete the Dakar Rally this year, he will have completed in excess of 9,000 kilometres through the kind of conditions and at the kind of speeds that would make the brave hearts of the toughest men cringe.

When Price set foot in South America last week ahead of the Dakar Rally, which officially kicked off on January 6th, he jokingly referred to the letter A that has been printed on the side of his motorcycle, saying that if your blood type appeared on the side of your motorcycle, then you knew that business was now getting serious.

Things getting serious is very much a part of everyday life for an enduro racer such as Price, who has broken more than 30 bones in his body during the course of his adventurous career.  Twice in his enduro rally career, the poster child for dangerous adventure has woken up in hospital with little to no recollection of his front wheel hitting a mysterious object and catapulting him into surgery, and very nearly into early retirement to boot.

Injuries to the tune of those that have been sustained by Price in the past, are enough to taper the most appetite-hungriest of adventurers’ lust for danger, but apparently Price falls into another category of being human altogether.

In fact, Price appears to be completely unmoved by injury, saying that the secret was to put it away from yourself and not dwell on it at all after the fact.  He did concede that it was hard at times, but that in the end, if you could get back on the motorcycle and try to enjoy it and have fun, then it was all worth doing all over again.

Price Not Your Average Enduro Athlete

Stephen Tuff, enduro expert, is of the opinion that Toby Price is a freak of nature.  In the best possible way, of course.  According to Tuff, the speeds at which Price navigates over tough and tricky terrain is a bit of a mystery.  Even more so when it becomes apparent just how little Price is phased by it all.  Tuff is of the opinion that Price is a natural rider who seems to ace treacherous terrain without trying too hard, or caring too much either, for that matter.

Price will be a force to contend with at this year’s Dakar Rally, that much is for sure.