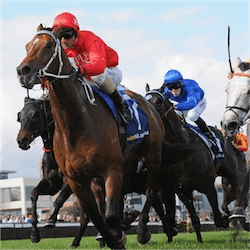 The Vain Stakes is one of the all time favourite Group 3 Thoroughbred events among trainers.  The event is open to all 3 year old thoroughbred colts and geldings and is run annually over a distance of 1100m at Caulfield Racecourse in Melbourne.  The event was named after the former champion racehorse by the same name.

Stars In The Making

Trainer Mike Price – trainer of one time fastest horse in the world superstar Lankan Rupee – has announced that his Cao Cao would be competing in this year’s Vain Stakes.  Cao Cao will be competing in the colours Gold, Red Cap with White Star.

Getting Back Into The Action

The Vain Stakes is the first group race of the annual racing season – and is exclusively open to colts and geldings.  The field is generally made up of returning stars hoping to go on to the bigger races of the season.  2013 saw 2nd placed Fast ‘n’ Rocking going on to win that year’s HDF McNeil Stakes at Caulfield.

In 2016 it was the turn of Russian Revolution to be crowned King of Vain, with Gold Symphony and Get The Nod laying claim to the same achievement in 2015 and 2014 respectively.

The Vain Stakes, Quezette Stakes (for the fillies) and the Listed Regal Roller are all three undercards for the highlight of the month of August – the Group 2 P.B. Lawrence Stakes.  An event especially enjoyed by trainers – none more so than trainer James Cummings.

Cummings has announced that this would be the year for a returning Hartnell to shine at P.B. Lawrence.  Harnell has won twice at Group 1 level in Australia, but has had to stand back in a couple of prominent races – achieving, at best, second place.

Hartnell has recently turned 7, and is a strong athlete well known for performing within expectations – and very seldom the cause of any unsettling surprises.