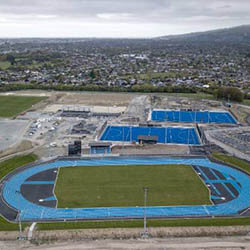 Athletics New Zealand and the City Council of Christchurch have signed an agreement to develop a 20-metre by 30-metre facility for Indoor Throwing and Strength Training. It will be situated on the site of the city’s Ngā Puna Wai Sports Hub, a feature which is line with the original idea of this space being the home for Athletics, Hockey, Rugby League, and Tennis. It will be built to help current and prospective sports stars hone their skills and increase their strength.

Ngā Puna Wai already offers an outdoor sports hub spanning 32 kilometres and will soon additionally allow for training across various throwing sports. This includes Shot Put, Discus and Hammer Throw, and will also make conditioning and strength equipment available for anyone who wishes to use it. The new facility will be within the zone currently devoted to Athletics and will likely be opened later on in 2020.

It will offer athletes a place to train as they get ready for the 2020 Olympic Games which are set to play out in Tokyo from the 24th of July to the 9th of August.

David Bailey, Council Recreation and Sports Services Manager, has described the new training area as a wonderful addition to an already very popular space. He said that when this facility is up and running it will see Ngā Puna Wai being able to cater to an even more diverse range of athletes and give them the chance to train no matter what the weather’s doing.