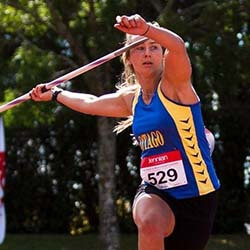 Despite having already qualified for the upcoming Tokyo Olympic Games, Kiwi javelin thrower Tori Peeters may have to sit out of this year’s Olympic run after all. Tori was last week named as part of the 15-person athletics team headed to Tokyo to represent New Zealand. The naming function was hosted by the New Zealand Olympic Committee at Auckland’s AUT Millennium track.

The Southlander from Gore was named alongside fellow-Kiwi’s and Olympic medallists like Tom Walsh, Nick Willis, and Dame Valerie Adams.

The problem with Peeters’ Olympic selection is that her naming came with a condition – that she must throw a distance of at least 62m at certain Australian competitions before April 30 if she’s to maintain her selection as part of the Olympic team for New Zealand athletics. Despite having tried to meet this condition, Peeters has now returned to New Zealand from Australia without having successfully met the qualification condition.

To date, Corbin Strong is the only Southlander confirmed to have fully qualified for the Tokyo Olympic Games. And at this stage of the proceedings, it certainly appears as if this will remain the prevailing situation as things currently stand.

Peeters has in the meantime responded to queries from the press by saying that she’s not yet ready to comment on her Olympic exclusion.