Coe Says It Won’t Be Easy To Cheat In Tokyo 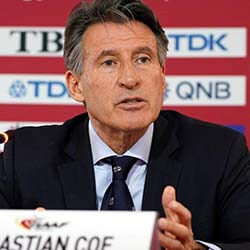 World Athletics President Sebastian Coe has warned athletes participating in next year’s Olympics against cheating, saying new technology will make it easier than ever before to “fearlessly weed out” drug and doping cheats.

Coe also addressed specifically the issue of “high profile athletes” who previously found it comparatively easier to get away with cheating, saying being a top Olympic contender no longer protected anyone from the sport’s investigative powers. Although many have long held the opinion that some countries have largely neglected to do everything in their powers to weed out stars who cheat, Coe seemed insistent that the situation has changed drastically since London 2012.

Commenting on the technology now used to detect doping and cheating, Coe said that this had become much more intelligence-based than before – not to mention more sophisticated and effective. Those athletes who do intend to cheat should know that there is a greater chance of them getting caught in Tokyo than at any of the previous Olympic Games, cautioned Coe.

Coe furthermore rejected the notion that the so-called “whereabouts” system, which determines that athletes found guilty of missing three drug tests over the course of a period equal to 12 months be banned from competing professionally for 2 years, was unreasonably severe. Coe explained that barring select complaints, the majority of athletes actually felt the system worked well. It is clear, unambiguous, and definitely not arcane law, said Coe.

Being asked to be in a particular place for but a single hour should not be an insurmountable challenge to anyone, concluded the athletics boss.