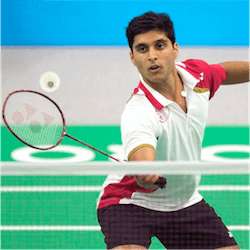 The Badminton World Championships is now well under way and team India is raking in one victory after another.  Kidambi Srikanth, Saina Nehwal and Sai Praneeth all secured pre-quarters berth after taking their respective oppositions to the cleaners on Wednesday.

Saina, for one, especially stepped up to the plate, registering a victory of 21-11, 21-12 against Swiss player Sabrina Jacquet in a record time of just thirty three minutes.  Currently seeded 12th, the 2010 London Olympics Bronze medallist said after the match that it had been a tricky affair and that beating Jacquet was no easy feat.

Saina will next go up against the victor of the match between Tanvi Lad and Sung Ji Hyun of Korea.

Praneeth also proceeded to the next round by trumping Indonesian player Anthony Ginting. Praneeth initially struggled to keep up with the Indonesian, losing the first game 14-21, but returned stronger than ever to restore the game to a final score of 21-18.

Preneeth said afterwards that it had been an exceptionally tough game and that luck had been on his side.  The 25 year old added that he was currently experiencing the best time ever in his professional career and that his goal was to simply keep going as he had been doing for the remainder of the tournament.

He tweeted afterwards that he was indeed very happy with his performance.

Lin Dan has made it abundantly clear that it was his intention to win the Badminton World Title for the sixth time at this year’s Badminton World Championships in Glasgow.  This was issued as a stern warning to long-time rival Lee Chong Wei.

Dan has said that he obviously wanted to be the World Champion yet again, and that winning was his dream, but that at the same time he realised that it was not going to be a walk in the park by any standard.

Many expect that Dan will be playing Chong Wei in the final – and Dan has committed to give it his all in order to do the expectations proud.

Meanwhile, Chong Wei has said that he wasn’t focusing on any player or rival in particular, but solely on his preparations.