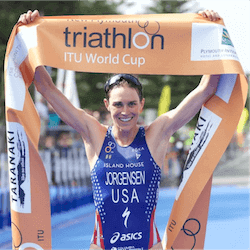 Upping The Stakes at the ITU Triathlon World Final

The ITU Triathlon World Series offers athletes the change to cross over from the world of athletics into the elite league.

With the final taking place in Rotterdam from September 14 to September 17 – the last of the hurdles must now be cleared.

Australian Triathlon World Champion hopeful Gillian Backhouse are one of the athletes now scaling the final stretch, having scored a run-away victory on September 3rd in the Czech Republic.  The 26 year old from Queensland not only won the race but had dominated it from the word go.  Local athlete Vendula Frintova finished in second place with Summer Cook from the United States in third position.

It is a performance that came exactly at the right time – Backhouse will be heading off to the finals in Rotterdam next, alongside teammates Charlotte McShane, Natalie Van Coevorden, Emma Jackson and Ashleigh Gentle.  Emma Jackson finished in 5th position in the September 3rd race.

Backhouse’s performance consisted of a swim that was nothing short of astounding, a strong bike race and a very consistent run.  The run took place in the cobbled streets of the Czech town.  Speaking to the press, Backhouse said that she had been swimming magnificently all year, and that this had boosted her confidence in at least as far as one out of three of the events went.  The plan was basically to go full throttle in the biking division, as there were a number of strong women in the field as far as the running went.  In short: swim hard, bike fast and try and make a bit of headway on the run.

The plan was executed in precise and highly effective fashion – catapulting the Australian into the lead early on already.  A large group had accumulated behind the Australian, trying their best to play catch up – but to no avail.

The Australian had set the bar high and was well ahead in terms of strength as well as fitness and game plan.