Kiwis Looking Ahead To PyeongChang 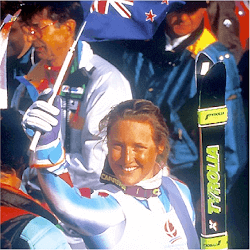 12New Zealand Fate About To Change

New Zealand is the holder of one solitary medal in the Olympic Winter Games. Alpine skier Annelise Coberger won silver in the alpine skiing slalom back in 1992 in Albertville in France. After and since, not a single other medal has been won at the Winter Olympics, by a Kiwi. But that is bound to change at this year’s Winter Olympics in PyeongChang.

This thanks, to the most part, to 16-year old Nico Porteous, New Zealand’s hope for this year’s men’s ski half pipe event.

The irony that Porteous went to school with Coberger’s children isn’t lost on young Nico. He remembers the talk on the playground; that someone’s mum had won had won a medal at the Olympic Games. Porteous stood head and shoulders above the rest when he finished in sixth place at the 2017 Winter Games NZ, a FIS World Cup-ranked event.

Porteous seems completely unperturbed by the fact that he is the youngest in the group getting ready to represent New Zealand. This despite the fact that a lot is being said about his young age and the fact that he will be competing on a world stage.

The youngster pointed to the fact that this was in fact the second year in a row that he had been competing in a world cup event, being the youngest player present, and that by this time he had become quite used to it.

Porteous quipped at the fact that the only drawback was that he was too young to attend the infamous after-parties, but added that this was perhaps not the worst thing. In fact, Porteous feels as if he had hit the jackpot to be included in the New Zealand team.

Porteous will be joined at the Games by his older brother (18), who will be competing in the same event as he. The brothers have been receiving training at the famous Olympic Park, best known for the famous Jamaican bobsled team. Porteous said it would have been strange not having his brother present as the pair had always trained and skied together.

Older brother Miguel agrees, saying that it was special to be competing alongside his younger brother at an event as large as the Olympic Games. Miguel also said that this was the way it had always been, that they had done everything together ever since Nico was born.

The event will be hosted by South Korea from February 9 to February 25.