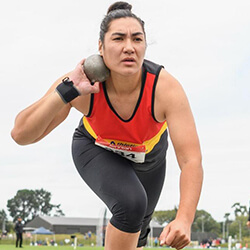 Lisa Adams has surpassed the Women’s Para Shot Put World Record for the second time in just three weeks, but this time she’ll be celebrating her achievement with an entry into the record books!

Adams pitched an impressive 14.52 metres in the F37 event she was participating in at the Sir Graeme Douglas Athletics Championships on 21 March 2019, bettering her 14.13m effort at the New Zealand Track and Field Championships earlier on this month. Both her efforts were record throws, but since the NZ meet had not been sanctioned by World Para Athletics, it couldn’t stand as an official world record. There were no such issues with her second heave, however, which saw her fifth attempt setting the record and her sixth and final one just 5cm shorter!

Adams, who has her sister Dame Valerie as her coach, stated that she never hoped to break the world record in what is her first season shot putting domestically. She said her ambition was simply to enter competitions and put the plans that she and Valerie had been working on into action, namely performing consistently, with a technique of good quality in place. She said that the new record being set was just the icing on the cake.

Adams has left hemiplegia, a kind of cerebral palsy that affects muscle growth and movement on the limbs on that side of her body. She spoke of the aim in practice and competition being to keep things light but focussed.