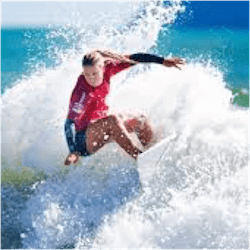 Hareb Back On The Pro-Board at WSL

New Zealand pro-surfer Paige Hareb is back on the World Surf League Championship tour for women after having completely fallen out of the rankings in 2014.  Hareb has been trying to get back into the runnings in the qualifying series for the past three years, but without success.  It had been a case of waiting for another to fall out as her fate was squarely in the hands of the Hawaiian CT surfer, Tatiana Weston-Webb and whether she (Weston-Webb) would ultimately succeed at eliminating Macy Callaghan, or not.

The final event for the year will take place running from 26 November up until 6 December and Hareb will officially join the success-list after the final event has been concluded.

The Pressure Is On Ahead Of Hawaii

What with the final WSL world tour event taking kicking off on 26 November, and the world crown being awarded based on the final outcome and at that event, it has become a larger than life and grand final quality affair.

Australian professional surfer Sally Fitzgibbons welcomes the size of the event and even the pressure associated with the grand final.  Fitzgibbons spoke to the press whilst preparing for the event, referring to it as the grand final and State of Origin all rolled into one package.

The fact that the crown will be awarded at the grand final in Hawaii just makes it all that more special for the Aussie.  Fitzgibbons officially leads the title race going into Hawaii.  However, if her two worst performances are factored in, she trails fellow Australian and world champion Tyler Wright.

Women’s surfing has been enjoying a new wave of interest from the press as well as the sports world at large.  Fitzgibbons and Wright were both headline acts and guests of honour at the surfing gala in Manly.  Prominent women in the sport were given an opportunity to tell their stories and honour the sport.

Fitzgibbons said afterwards that this was what she enjoyed most about Aussie sports in general, that they paid homage to and honoured their athletes and sports men and women for their achievements.