RWC, F1 May Be Affected by Hagibis 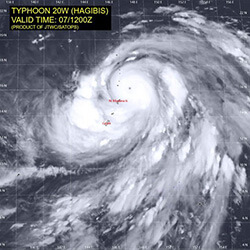 Organisers of both Formula 1 and the Rugby World Cup are currently monitoring a large typhoon that has been forming just south of Japan, which is expect to bring torrential rain and strong winds to the country over the weekend. The Japanese Meteorological Agency has stated that Typhoon Hagibis is expect to reach the highest level of violent, adding that it could possibly hit the country this year. World Rugby has announced that the typhoon is heading in a north-westerly direction, and it could bring some disruption to Southern Japan.

The Typhoon is predicted to make contact with the southern island of Kyushu this weekend. There are two different fixtures taking place over this period, with one being a crucial match for Ireland, who will be playing against Samoa in Fukuoka. At the same time, Wales will be facing Uruguay in Kumamoto the following day. Despite the potential risks, World Rugby has stated that they have contingency plans in place should the extreme weather impact any event fixtures.

Any games that are cancelled during the World Cup due to weather are registered by officials as scoreless draws. Ireland is in need of a bonus point win against Samoa to make sure that they are able to reach the finals. Defence coach Andy Farrell of Ireland has said that World Rugby is keen to see the game take place, and that weather forecasts change all the time, and that the team is carrying on as normal.