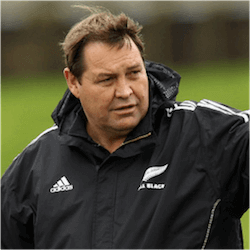 The Annual Halberg Sports Awards serve to recognise and honour top sports men and women, as well as teams, in New Zealand. One of the most celebrated awards at this year’s ceremony went to All Blacks head coach Steven Hansen. Hansen was presented with the coveted Sport New Zealand Leadership Award.

Sport New Zealand CEO Peter Miskimmin praised Hansen for his dedication and hard work, saying that what was most impressive about Hansen was not what he had achieved, but rather how he had gone about achieving it.

Miskimmin went on to say that Hansen drew on his love and understanding of the game, as well as superb life and coaching experience, continuously re-inventing himself as well as his coaching style, in order to get the best possible results.

New Zealand Rugby Chief Executive Steve Tew agrees.  He added that New Zealand rugby was incredibly proud of what Hansen and the team had achieved and that having been ranked the best rugby team in the world for eight consecutive years in a row, as well as winning 90% of all games did not come easy and required a lot of dedication to the game.

Tew said that Hansen is a strong leader and an example not only to those moving in New Zealand rugby circles, but to the world-wide rugby circuit as a whole.

One really needs only to consider what is regarded as important to the rest of the rugby world, in order to fully realise the impact that the All Blacks team has on the sporting world.

Australia’s rugby boss, Raelene Castle, recently said that the only way that Rugby Australia would recognise the Wallabies as a world class team is if they managed to consistently beat New Zealand in the Bledisloe Cup. Australia last won the Bledisloe Cup back in 2002 and regaining trans-Tasman respect and pride is at the order of business.

Beating New Zealand during the upcoming Super Rugby season will certainly go a long way towards achieving that particular goal. It remains an interesting point of conversation that regaining national pride is a matter of beating New Zealand. At anything, really.

Which of course, will prove to be no easy task.