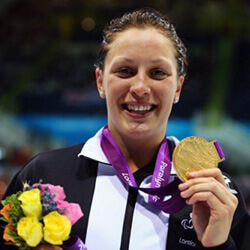 The decision about Sophie Pascoe is an emblematic one for New Zealand sport. Making Pascoe the flag-bearer for the Commonwealth Games at the Gold Coast represents a wonderful step forward in the country’s sporting history.

Pascoe, at 25-years old, has attained the best level in parasport, and appointing her to conduct the national team, without an asterisk alongside her name, is an informed step that New Zealand can be very proud of. It highlights the accessibility and inclusivity available to athletes from this country, and sets an excellent example to the world about sport being important beyond the question of winning, or hunting for fame and fortune.

Rob Waddell’s call is sure to resonate for generations to come.

The announcement was made in front of roughly 500 people at the Surfers Paradise QT Hotel ballroom. The venue is set to moonlight as the House for New Zealand while the Games unfold.

With a New Zealand flag arranged around her, Pascoe approached the lectern, and spoke of her desire to bring integrity to the team. She wavered slightly, but held on to her nerve in spite of the emotion that was obviously just below the surface.

She talked of being utterly astonished when Waddell flew through to Christchurch to give her the news, addressing a media throng at the beach after the announcement. She said that Waddell sat her down in the Christchurch High Performance Centre and told her the news, and that she was humbled when he went on to list all of the reasons that she had been chosen.